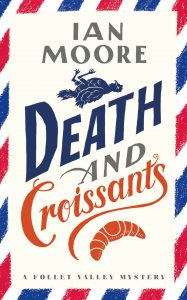 Free@Last TV, the production company behind ‘Agatha Raisin’, has optioned comedian Ian Moore’s mystery series Follet Valley including the first book Death and Croissants for a TV series. Rights were bought from Farrago, the humorous fiction imprint of Duckworth Books.

According to the acquisition statement: ‘Death and Croissants was published at the start of this month (1 July) and has become a standout summer fiction read through Waterstones and independent bookshops. It is “a very funny page-turner” (Adam Kay) and “like going on a joyous romp through the Loire valley with Agatha Christie, P.G. Wodehouse and M.C. Beaton” (C.K. McDonnell).

‘In the Follet Valley series, Richard is a middle-aged Englishman who runs a bed-and-breakfast in the Loire Valley, France. One day an older guest goes missing, leaving behind only a bloody handprint on the wallpaper. Another guest, the enigmatic Valérie, persuades a sceptical Richard to investigate the disappearance – leading them both into a series of local amateur sleuth investigations.’

Barry Ryan, joint md of Free@Last TV, said: “Charm. Wit. Flair. It’s rare to come across a first novel that manages to combine an intriguing twisty plot with laugh-out-loud humour. Ian is a first-class writer and we immediately saw the potential for a long-running series with returnable characters we know people will adore. We’re proud to add Follet Valley to the Free@Last slate and are very much looking forward to getting going.”

Moore said: “I’m so happy. I wrote the books with the idea of putting a smile on people’s faces. I hope the TV versions will do the same and I know that Free@Last TV want the same. Smiles all round.”

Pete Duncan, md of Duckworth Books, said: “Knowing what Free@Last TV has achieved with Agatha Raisin, now headed for its fourth season, we are thrilled to be working with Barry and the team on Ian’s charming Follet Valley series.”