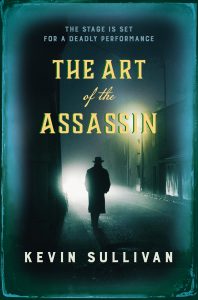 The cover of The Art of the Assassin by Kevin Sullivan, the follow-up to The Figure in the Photograph (April, 2020), which will be published in ebook and hardcover by Allison & Busby in February 2021, has been announced.

The Art of the Assassin:

1898, Glasgow. A man is found stabbed to death in a tenement block and the police are struggling to grasp any leads. Juan Camaron, photographer-cum-sleuth, is drafted in with his trusted camera in the hope he can bring to light what the eye may overlook. Yet Juan has problems of his own. Following the tragic death of his father in Cuba some months before, the man’s legacy is threatened by a plagiarism suit from a mysterious senora, and Juan’s hoped-for happiness with his fiancee, Jane, might be over before it’s even begun – even more so when a visiting professor is murdered and Jane is witnessed fleeing the scene. Juan finds himself torn between finding the killer and finding his fiancee – but are they one and the same? The truth is in the frames.

The Figure in the Photograph will be published in paperback also in February 2021.